Below are brief descriptions of each of the four sections of this inaugural issue of Ministry Digest.

SECTION ONE:
THE HISTORY OF THE LORD’S RECOVERY

The Lord’s recovery among us is unique in church history. The Lord has brought us to a point where the age can be turned, and we need to know the history of His move among us. On November 2 through 24, 1981, in a service training for all the churches in Asia that was held in Hong Kong and Taipei, Taiwan, Brother Lee released a series of twenty-eight messages covering the history of the Lord’s recovery in a detailed way. In addition, these messages detail the many revelations that the Lord has given to us over the course of our history. These twenty-eight messages have never been published as a standalone book in English, appearing for the first time as “The History and Revelation of the Lord’s Recovery” in volume 2 of the 1981 set of The Collected Works of Witness Lee. We will present these twenty-eight messages in seven sequential issues. All who are interested in knowing about the history of the Lord’s recovery among us and the lessons that we can learn from history should read this section.

The move of the Lord begins with the gaining and building up of new believers, and throughout his ministry Brother Lee spoke on numerous occasions to new believers. This section introduces messages that are suitable for new believers. In 1959 Brother Lee was burdened to carry out the work in a new way by bringing in new ones year by year and training them in the truth. During that year many messages were spoken with new believers in mind and have been printed in publications such as On Knowing the Bible, Lessons for New Believers, Ten Lines in the Bible, and Lessons on Prayer. In this issue we will begin the section for new believers with messages from the book On Knowing the Bible, covering a basic yet foundational truth for new believers. The original book has four chapters. An additional chapter was added in The Collected Works of Witness Lee, 1959, volume 3. We will present the first four chapters in this issue and conclude with the fifth chapter in Issue 2. These messages, given in a service training conducted by Brother Lee in Taipei, Taiwan, provide a background knowledge of the Bible and how to get into the Bible. In subsequent issues, messages pertinent to a new one’s knowledge of the truth and growth in the divine life will be presented.

The purpose of receiving the divine life as a new believer is to grow and mature in life. In 1955 in the Philippines, Brother Lee was burdened to release a series of messages on the subject of the maturity in life, and these were subsequently printed in the book The Way for a Christian to Mature in Life. In this speaking he also exposed the error of the commonly held belief that Christians go to heaven when they die. This series of messages, given in Manila on May 22 through September 11, 1955, presents the basic revelation and truth concerning the need for a Christian to mature in the divine life. The original book has fourteen chapters, but seven additional chapters were added when it was included in volume 3 of the 1955 set of The Collected Works of Witness Lee. In this issue we will begin with the first four chapters and continue in subsequent issues until all twenty-one chapters have been presented.

SECTION FOUR:
THE HIGH PEAK OF THE DIVINE REVELATION

A Christian who is maturing in the divine life will be brought to the high peak of the divine revelation. Brother Lee began to touch the matter of God building Himself into man and man becoming God in life and nature but not in the Godhead in the Life-study of 1 and 2 Samuel in 1993. In 1994 he began to refer to this truth as the high peak of the divine revelation. In this issue we will introduce his first speaking in this regard in 1994 with the messages that he gave on May 17 through 20, 1994, to elders from Taipei, Taiwan. These messages comprise the book The High Peak of the Vision and the Reality of the Body of Christ, which is also in volume 1 of the 1994–1997 set of The Collected Works of Witness Lee. In the next two issues we will present his speaking in the Life-study messages from 1 and 2 Samuel. Thereafter, we will introduce additional books related to the high-peak truths.

May the Lord bless our reading of and constitution with the riches that He has entrusted to us!

The History of the Lord’s Recovery

The Collected Works of Witness Lee, 1981, vol. 2, "The History and Revelation of the Lord's Recovery"

The High Peak of the Divine Revelation 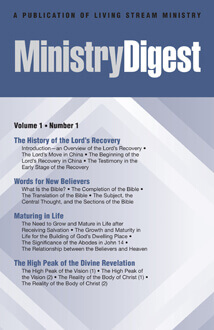